“Out of home screens will be mainstream broadcast channel in 2020” Ocean Outdoor is making a bullish statement about the power of branded content on DOOH screens, backed up by examples of brand success and new neuroscience research that proves its effectiveness.

“2020 will be the year when content will become mainstream on OOH screens and will be seen as a really valid route to market [that] can drive business results,” says Phil Hall, Ocean’s joint managing director.

Ocean, operator of iconic digital screens such as Landsec’s Piccadilly Lights, Holland Park Roundabout, Birmingham Media Eyes, and in assorted locations at both Westfield London and Stratford City, has spent the past five years building exclusive content deals with broadcasters such as ITV and the BBC and other content providers such as Team GB and The British Fashion Council.

Its aim is to offer brands an outdoor broadcast channel and the chance to be involved in topical, water-cooler moments without using the more expensive TV-sponsorship model.

Now it believes it has the brand case studies and a substantial body of robust effectiveness research to back up its claim that DOOH can become a broadcast channel that should have a place on savvy media schedules.

In two media firsts, Ocean brought Jaguar’s Wimbledon sponsorship to life on its full-motion screens and also worked with ITV to promote its hub, showing highlights of Rugby World Cup matches with brand ads alongside the content.

The results were unveiled at a breakfast presentation at London’s Royal Academy of Arts, another Ocean partner. (See results and a photo gallery of the event below.)

“We partnered with Ocean to identify the ideal brand to take this to and it was Jaguar,” says Lee Mabey, integration strategy director at Posterscope.

“Jaguar wanted to bring SW19 to the nation and this was an ideal opportunity. Ocean conducted neuroscience research to understand the effectiveness of content in out of home and found that it is a fantastic channel [in which to do so].”

And a new consumer survey carried out for Ocean by YouGov among 2,000 GB adults discovered that elusive young audiences like, want, trust and respond to live broadcast content on outdoor screens (see key findings below).

‘What it proves to the rest of the OOH industry is that content does have a place on the schedule,” Mabey believes. “I now expect other brands to look at these results enviously and to decide they want to use OOH to deliver branded content experiences.”

The job of OOH is to connect with people in a way that other broadcasters aren’t able to, says Kevin Henry, Ocean’s head of content & sponsorship, who has been leading the strategy to build content partnerships and help position DOOH in the “screen” universe. “Out of home is a very unused space in this way,” he explains. “We’re just a big TV screen which creates impact and an immersive, shareable experience that you can’t get anywhere else.” What Jaguar did: a media first

Jaguar brought bespoke content and live streaming from Wimbledon 2019, to Ocean’s full-motion screens, allowing the car brand to create “pop-up” Wimbledon experiences outside of SW19, complete with Pimms, strawberries and cream, astroturf and deckchairs. Live and highlights content from Wimbledon had never before been shown on OOH screens around the UK. 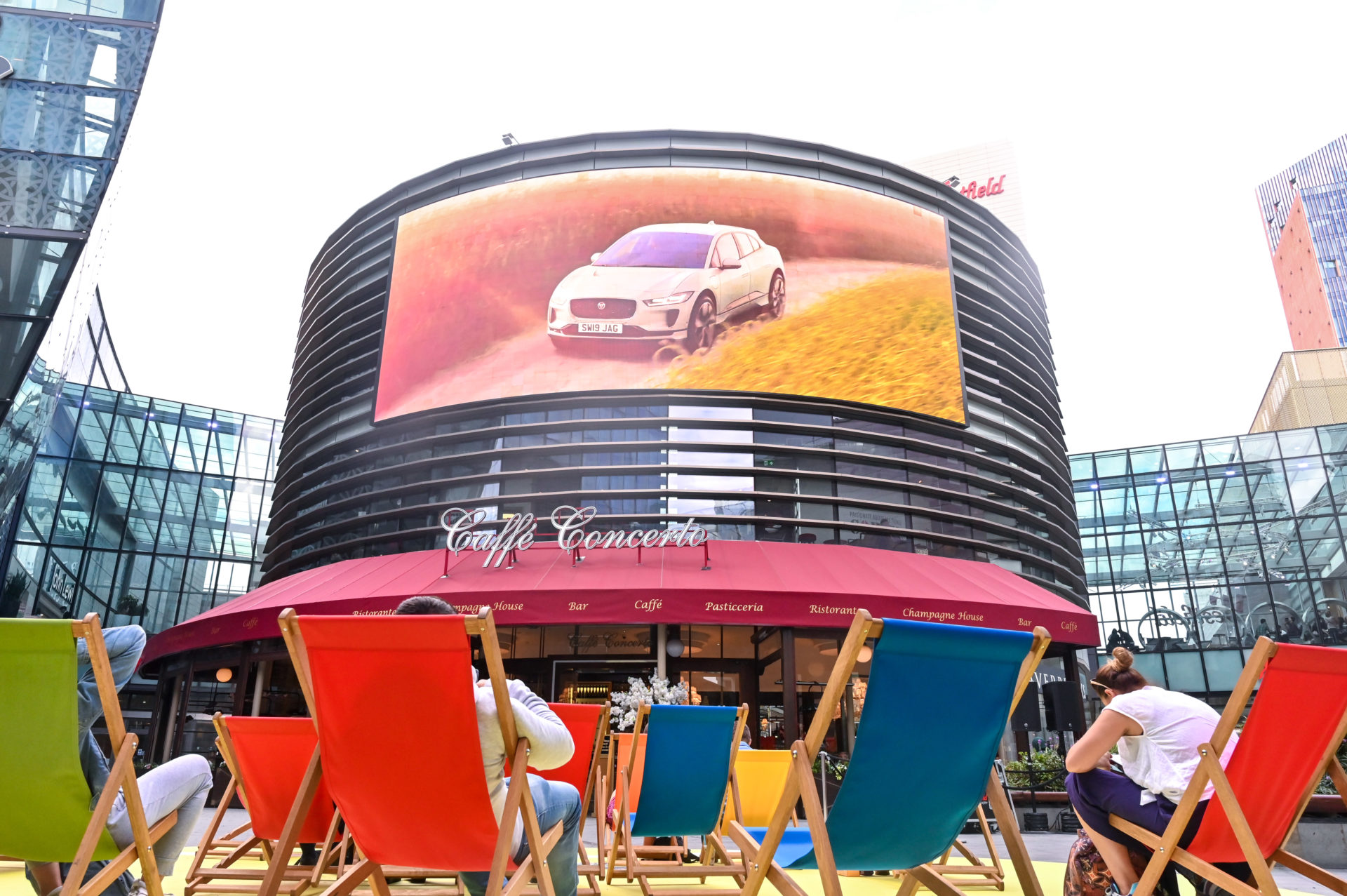 Jaguar was able to develop a commercial assocation with Wimbledon (for advertising, rather than just brand placement) which is not possible when the content is broadcast via the BBC. 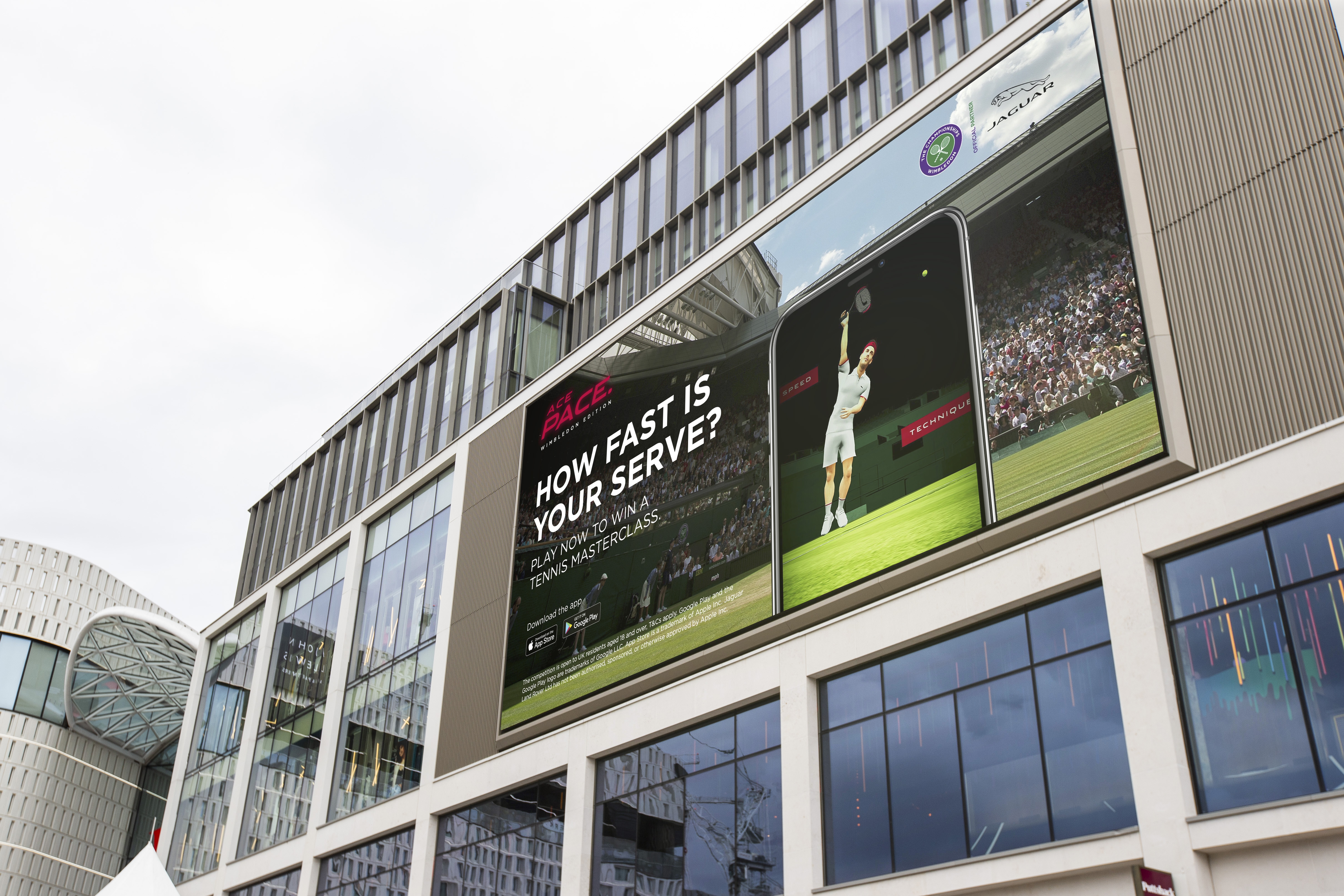 What ITV did: a media first

When the Rugby World Cup was played in Japan, eight hours ahead of UK time, ITV was keen to attract viewers to its ITV Hub where they could watch highlights at different times and outside the home.

Through its partnership with Ocean, the broadcaster was able to bring highlights of every match to out of home sites and encourage people to sign up to the ITV Hub. Screens also carried branding for Hugo Boss and Tudor Watches. 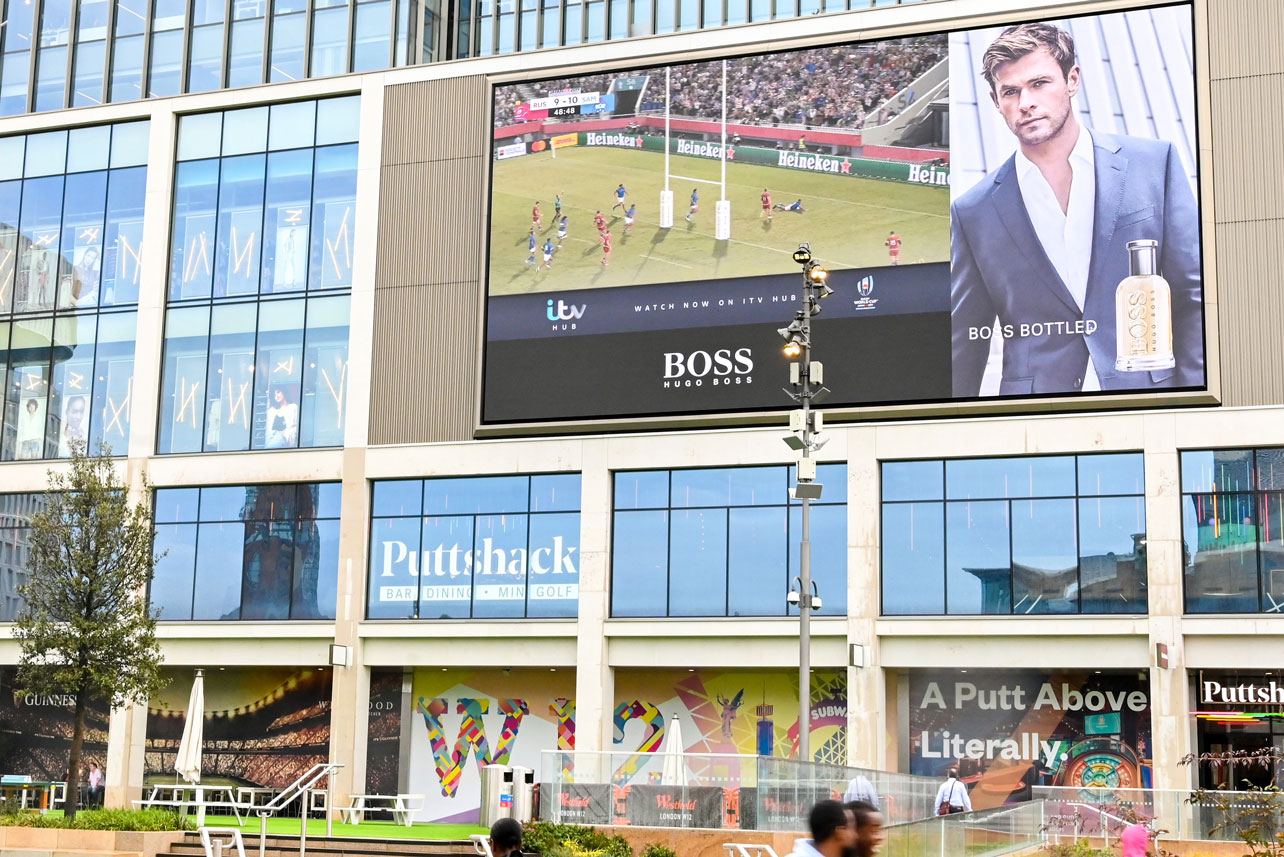 The media first in this campaign was the introduction of a dual screen which allowed for both the brand advertising/sponsorship and the RWC content to run alongside each other simultaneously, giving the advertiser the same amount of exposure as the live content.

The activation, which launched with a 10 minute package on Landsec’s Piccadilly Lights, is part of ITV’s “More than TV” strategy. “We were able to put the ITV hub at the forefront of everyone’s mind in an environment where we want them to be doing just that,” says ITV’s marketing manager Chris Anstey,

RWC on the ITV Hub 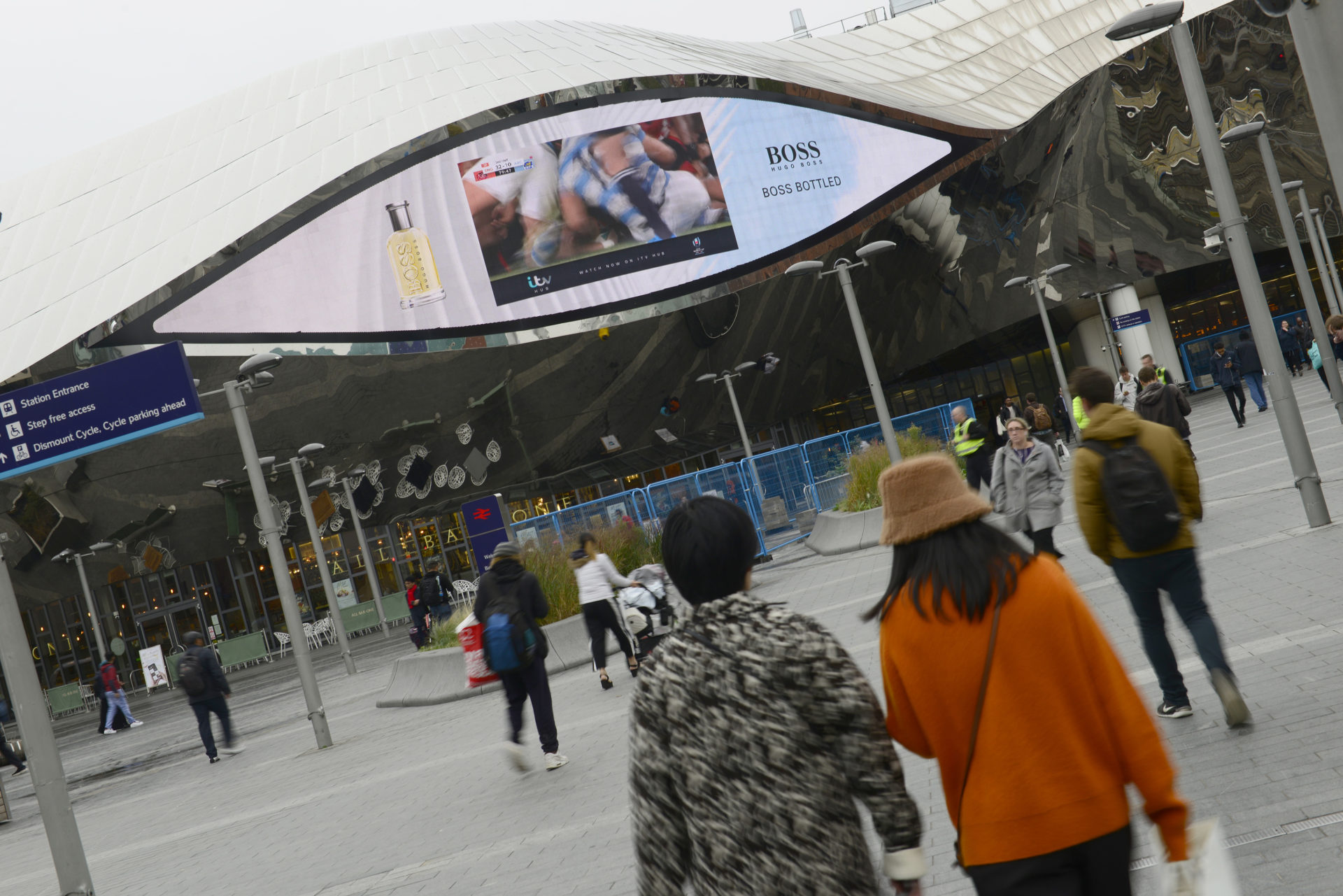 What the 2020 YouGov consumer survey found:

• 25% of 18-24-year olds are more likely to pay attention to ads alongside live content on digital billboards and posters outside of their home than standard ads alone.

• One in four 18 to 24-years-olds are also more likely to engage with ads that appear alongside live content, such as a sports match.

• It’s not often people ask for more advertising: as well as being interested in seeing more live content on DOOH, just over one in 10 (11%) of all respondents would like to see more dynamic and interactive advertising.

• Almost half (49%)18-24-year olds are interested in seeing more content on screens, compared with one in three of all respondents (30%) .

• Breaking news was the most popular form of live content for all respondents (77%) followed by weather updates (72%) and live transport updates (66%). 38% like to see film and TV trailers, with live sports (27%) and music related content (21%) also proving popular.

• 16% of 18 to 24-year-olds agree they are more likely to trust that the live content they see on a DOOH screen is genuine, compared to seeing content online or on other traditional media channels like TV or print.

• While DOOH has not been around for as long as more established channels, irrelevant of age, audiences are likely to trust it just as much as traditional media, and in some cases more. 71% of people aged 35 to 54 agree that they have the same level of trust in DOOH as much as online and traditional media channels, compared to almost 3 in 5 (63%) of 25 to 34s and almost half (49%)18 to 24-years-olds.

• One in five (21%) 18 to 24-year-olds say they are more likely to take action towards a brand which appears alongside live DOOH content.

Mini billboards are an excellent tool for both billboard companies and their advertisers. They… END_OF_DOCUMENT_TOKEN_TO_BE_REPLACED

We are very visual creatures, so visual, in fact, that color plays a much… END_OF_DOCUMENT_TOKEN_TO_BE_REPLACED